Well, Im happy to say that after 15 years of being with my husband he has finally chosen to go vegetarian!!
For those of you that are raw, vegetarian, or vegan and have a significant other that does not eat the same diet as you,  or even close, understand that it can be very challeging and upsetting when you watch someone you love eat food that has no nutritional value and is damaging their health....But this little movie Food Inc. definitly sealed the deal for him...... 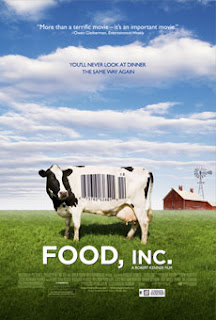 I know that Im a little behind most of you as far as watching the documentary Food Inc., but Keith and I  finally watched  it last week and WOW, such an eye opener, especially if you are one that is still eating animal meat. So I can't let this week go by without giving some facts and information from the movie. I would reccomend everyone watch this film!!

The purpose of the film was to educate people to trace the food they buy back to it's source.
In 1970 5 meat packing companies controlled 25% of the market....
Today 4 companies controll 80% of the market....Tyson-Swift-Cargill-and National beef
Tyson is the largest meat packing company in the HISTORY of the WORLD!!!!
They have changed the entire way that chickens are raised....
In 1950 it took 70 days to raise a chicken.. In 2008-48 days, BUT TWICE AS BIG!!!
So much of this is because of genitically monitered corn....

30% of our land is farmed for corn, driven and backed by the government.
This corn is used to feed the factory farmed cows, chickens, and pigs, and is in 90% of the products on the grocery store shelf , in the form of high fructose-maltodextrin-xanthum gum-gluten-sucrose-fructose-sorbic acid..
Some of the everyday products are: Ketchup, OJ, Motrin, Coke, Cheese Its, Twinkies, Peanut Butter,
Jelly, Salad dressing, and FAST FOOD.
Of course all of this sugar in our food contributes to the obesity epidemic that our country is experiencing...

Since corn is subsidized by the government, it is sold below the price of production, to keep the factory farming up and running, to provide meat to the public to the tune of an average of 200 lbs of meat per person, per year!!! And never mind that cows are not designed by evolution to eat corn, they are designed to eat grass!!!! (Thats a whole other blog on the effects of corn on factory farmed animals)!

If you have never witnessed what goes on in our American factory farms-you must see this film..They were able to get into the actual factories and film the terrible conditions that these animals exsist in prior to going to slaughter and ending up in your grocery and on your table. It's estimated that there could be over a thousand different cows meat ground up ,( healthy, sick, or dying,) in the making of one hamburger that ends up on your plate.

So if 80% of the meat packing industry is controlled and monopolized by 4 companies, a lot of people feel hopeless for change. But there are many things we can do as consumers to bring about the necessary change.

First and far most: Educate yourself on the adverse effects of meat to the human body.
Investigate the positive outcome for yourself by becoming a vegetarian, vegan, or  raw foodist.
Buy from companies that treat their workers, animals and enviroment with respect.
Buy foods at your grocery that are in season.
Buy organic.
Read labels 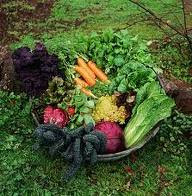 Buy foods that are locally grown.
Shop at a farmers market.
Plant your own garden.

And know that everyone has the right to healthy food!!!!!!!!!!!!!!!!
I have only covered a fraction on this huge topic. Hopefully it has raised enough self intrest to make you do your own investigation.