I have been hearing and reading about this little pink pill for weeks. I haven't really heard a lot of good things about it , actually more negative than positive. Some of the information coming from the associated press states: 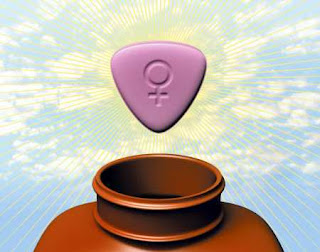 "A pink pill designed to boost sex drive in women-the latest attempt by the drug industry to find a female equivalent to viagra-fell short in two studies, federal health regulators said Wednesday.
The FDA also noted increased side effects like depression, fainting, and dizziness among the women taking the pill.
According to the report there is no other treatment currently on the market to help women suffering from a low sex drive."
The pink pill (flibanserin) came up for approval from the FDA last Friday June 18 and did not pass, so they were sent back to the drawing board...


The FDA advisory panel agreed that flibanserin wasn’t significantly better than a placebo and that its slight benefits don’t justify its side effects: dizziness, nausea, fatigue, and depression.

As reported by CBS news, the FDA needed to be convinced that the drug increased sexual desire regardless of the occurrence of sex. However, an independent study revealed that the women taking the drug only reported a slight rise in sexual satisfaction.

So what are women to do that actually suffer from a low sex drive?????
Well there may not be a pharmacutical drug to boost a low sex drive in women, but there is a plant called maca root that that has helped women  for centuries.
I have written about maca before, but I felt like is was worthy of a repeat in light of all the attention on womens low sex drive and this little pink pill.

The results of clinical research has proven that maca helps in sexual performance and helps boost libido. Clinical case studies have shown that Maca can help relieve the discomforts of PMS and menopausal symptoms.
New York-based Dr. Viana Muller introduced Maca to other medical doctors at the 1997 Anti-Aging Medical conference and noted that Maca Root had been used successfully by Peruvians to regulate hormonal imbalances, menstral irregularities, fertility, and menopausal symptoms, including loss of energy and libido and temporary depression.
I have been taking Maca for 3 yrs, and there is no low libido in my house!!!
Maca is also considered an adaptagen, which means it has the ability to balance out your hormones, and free yourself from PMS and menopausal symtoms. Some people who take maca see immediate results, others may take up to 30 days.
So if you suffer from low libido or have problems with PMS or menopausal symptoms-run get yourself some maca root. I believe every woman needs this in their daily diet even if they aren't experiencing these symptoms. By the way it works great for men also.
I buy organic raw powder and put 2 heaping tsps in my smoothies everyday.
Get some balance and fun in your life-get some maca!!
Until next time,
Jan
Tweet Like Post Plus